January
AED 1645
February
AED 995
March
AED 1443
April
AED 1458
May
AED 1469
June
AED 1623
July
AED 1509
August
AED 1715
September
AED 1465
October
AED 1494
November
AED 1417
December
AED 1784
Currently, the cheapest month for flights to Bucharest is February. The most expensive month for flights is December. The cheapest prices are shown above but prices will vary according to departure times, airlines, class and how early you book.

When is the best time to fly to Bucharest?

Why not book cheap flights to Bucharest and visit the cultural heart and largest city in Romania? The capital since 1862, Bucharest is a vibrant city that remembers its past while embracing the new and contains a mixture of neo-classical, communist and modern architecture. The highlight for many travellers arriving on flights to Bucharest is attending one or more of the festivals which take place in the city each year showcasing the city’s plethora of artistic and musical talent. It is famous for its house music, with clubs scattered throughout the neighbourhoods of the city blasting bass into the early hours of the morning. These plus the universities inject a youthful vibe into this age-old city. Summers are hot and dry in Bucharest with temperatures averaging 26C and this is when the majority of tourists take in the city sights and festivals on offer. If you’re planning on visiting during the summer, be sure to make travel reservations months in advance.

Bucharest is quietest in the wintertime so cheap flight tickets are easy to come by. The city is located on the Romanian Plain and subject to chilly winds that drive the temperature well below freezing; snowfall is common. Skiers will appreciate the Carpathian Mountain Range just two hours away from Bucharest.

When is the best time to book flights to Bucharest?

Most people prefer to book flights to Bucharest between June and August, this is when the city is full of lively festivals, attractions are open and the parks are in full bloom. The shoulder seasons of spring and autumn can also be a good time to visit if you want a quieter holiday. There may be a bit of rain, so pack an umbrella to be on the safe side. April and May offers arts festivals such as the Bucharest International Film Festival (April) and the EuropaFest (May).

Which day is cheapest to fly to Bucharest?

Wednesday is currently, on average, the cheapest day to fly to Bucharest. Flying on Friday will result in higher flight prices.

At the moment, flights in the evening are likely to offer the best value for money for your Bucharest trip. A flight in the afternoon will more often than not be of higher cost.

How long is the flight to Bucharest?

Which airlines operate flights to Bucharest?

Henri Coand? International Airport (OTP) is located around 10 miles north of Bucharest’s city centre. There is a direct train and express bus service to Gara de Nord railway station in Bucharest, both of which are frequent and inexpensive. Taxis are also available. Rental car counters are situated between the Departures Terminal and the Arrivals Terminal. 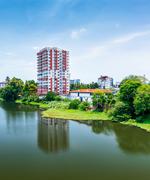 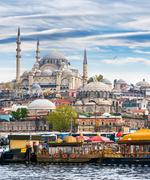