January
AED 4285
February
AED 3646
March
AED 4436
April
AED 5112
May
AED 4991
June
AED 5064
July
AED 5325
August
AED 5784
September
AED 4847
October
AED 4271
November
AED 4032
December
AED 4917
Currently, the cheapest month for flights to Sacramento is February. The most expensive month for flights is August. The cheapest prices are shown above but prices will vary according to departure times, airlines, class and how early you book.

When is the best time to fly to Sacramento?

Peak Season:
With weather not playing a factor in determining the best time for travellers to take flights to Sacramento, peak season is determined by the local events calendar. As such, the most popular time to visit is August and September when the California State Fair arrives at the California Exposition fairgrounds. This annual event has been taking place for more than 150 years and features exhibits, petting zoos, carnival games and live shows.

Off Season:
The Sacramento winter, or what passes for it with average temperatures in December and January dropping to a not-exactly-freezing 12 degrees Celsius, constitutes the off-season, though the place is far from inhospitable at this time and is a great time to search for cheap flights to Sacramento. Although it may be considered the off season to fly to Sacramento, events such as the free New Year’s Eve celebration is sure to keep visitors entertained. The event lights up the skies above Old Sacramento and features fun activities for the whole family to enjoy such as live music, dinner specials, drinks and an array of entertainment.

When is the best time to book flights to Sacramento?

Booking 34 days in advance of your planned departure date is, on average, the best time to get cheap flights to Sacramento. The general trend is that the closer you book to the departure date, the more expensive your flight will be.

Which day is cheapest to fly to Sacramento?

At the moment, Saturday is the most economical day to take a flight to Sacramento. Monday is likely to be the most costly.

Flights at midday are typically the cheapest time of the day to fly to Sacramento. Flights in the morning are usually the most expensive.

Sacramento has moved on from its past as a pioneer town to a modern metropolis that celebrates its history but prefers its more up-to-date image. This new spruced up reality is in evidence with its City of Trees nickname but, more importantly, is rooted in the number of green spaces scattered about the city.

Sacramento is the capital of California and is among the ten fastest-growing areas in the U.S. Although its population is just less than 500,000, it is part of a greater region that encompasses more than two million inhabitants, though even that makes it merely the fourth largest in the state after Los Angeles, San Francisco and San Diego.

Within Old Sacramento everything is housed within vintage 19th-century buildings. Little more than a stone’s throw away, the American River cuts through the heart of the city and offers several outdoor leisure activities such as river rafting and fishing.

Regardless of whether it is the great outdoors or the history of the Gold Rush that draws you here, you will not be disappointed.

Despite its California location, Sacramento has a Mediterranean climate with mild winters and hot and dry summers. However, the summer heat is not accompanied by humidity, making it a lot easier to take and is a great time to book flights to Sacramento. The local rainy season falls between November and March.

Sacramento is a typical American city with an extensive road and freeway system connecting it to other cities, but unlike many other American cities it also has a widespread network of bicycle and pedestrian paths. Getting around by car is the most convenient, but the traffic can get very slow in the city centre. Rental car offices can be found at the airport and in the city centre. Local buses cover the city and surrounding areas with reliable, cheap service, but they can be slow. The light rail system connects the city to its surrounding suburbs.

Flights to Sacramento International Airport (SMF) will leave you with a short 10 mile (16km) journey to the centre of Sacramento. There are airport shuttle bus transfers readily available at the airport to whisk you off to the city. Alternatively, you can take a taxi or hop on the Yolobus which is an efficient and affordable way of reaching the city. 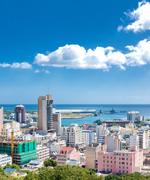