When is the best time to fly to Florianopolis?

Florianopolis enjoys an annual average temperature of 20°C and benefits from a superb climate that offers comfortably moderate temperatures even during the cooler months, making the city ideal for a visit at any time of the year. The warmest months are January, February and March. The coolest month is July and it is around this time that the most reasonably priced accommodation and cheapest flights can be found. In July the Festa da Tainha takes place. This festival’s music and dancing from different parts of Portugal, and particularly from the Azores, is superb.

Which day is cheapest to fly to Florianopolis?

At the moment, Tuesday is the most economical day to take a flight to Florianopolis. Monday is likely to be the most costly.

At the moment, flights at midday are likely to offer the best value for money for your Florianopolis trip. A flight in the morning will more often than not be of higher cost.

Renowned as one of the world’s most dynamic cities, Florianopolis is located partly on the mainland of southern Brazil, and partly on the island of Santa Catarina. It is a bustling, modern city with superb shopping malls, high end restaurants, excitingly glamorous nightlife and 42 of Brazil’s most beautiful beaches. In recent years it has become one of the country’s most popular holiday destinations due to its vibrant atmosphere, friendly people, beautiful scenery and fascinating culture. It is also a centre of surfing activity. There are isolated and unspoilt beaches to be found, plus several brimming with sports and entertainment. The Lagoa da Conceição lagoon, a large and lovely lake in the centre of the island, is a world-class location for windsurfing. The area also offers plenty of options for paragliding, scuba diving, sandboarding and trekking. Those interested in history will love the 18th century forts built to protect the city from possible attacks by the Spanish. The Hercilio Luz Bridge links the island to the mainland and is the symbol of the city. One of the city’s most beautiful buildings is the 17th century Catedral Metropolitana, and is well worth a visit. The Museum of Anthropology on the university campus delves into the lives of the Atlantic coast native Indian people. The Victor Meirelles Museum features the work of one of Brazil’s most famous painters. The Municipal Market on Largo da Alfândega is a great place to get a feel for the city, and an evening of traditional entertainment at the Teatro Álvaro de Carvalho should not be missed.

The public bus system is the most efficient means of travelling around Florianopolis. There are numerous services running between nine terminals, in addition to the air conditioned executive specials that run from the city centre to the beaches and airport. Bus services are generally available from 6 am to midnight, and are comfortable and reliable. Taxis are also commonly used to move throughout the city and are relatively cost efficient. They are easily recognisable by their red and white colouration and chequered stripes.

Hercilio Luz International Airport (FLN) is located 8.7 miles (14 km) from the centre of Florianopolis. Several bus and taxi companies offer airport shuttle services. These generally have a fixed tariff. Taxi fares vary widely, but there is a little room for negotiation if you don’t mind bargaining. There are also bus services offering direct routes between the city and the airport. The more exclusive executive service costs a little extra but offers small, air conditioned buses that run more regularly than the usual transit system. 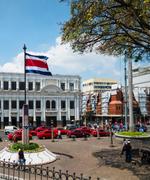