January
AED 2365
February
AED 2196
March
AED 2144
April
AED 2416
May
AED 2438
June
AED 2218
July
AED 2446
August
AED 2413
September
AED 1939
October
AED 2042
November
AED 2266
December
AED 2354
At the present moment the cheapest month to fly to Oxford is currently September; with July being the most expensive. Prices will vary depending on multiple factors such as booking in advance, airline and departure airports and times.

When is the best time to fly to Oxford?

Although one of the driest cities in England, Oxford has rain year-round. Summers are warm with temperatures in the mid-20s Celsius and high humidity. Winters are chilly and damp with temperatures ranging from the low single digits to about 10, although it rarely snows.

Summer is considered the high season, and August and September bring throngs of visitors on flights to Oxford. Many of the estates are open March through September but only and for a limited number of hours. If travelling to Oxford during the first week of July, visitors can enjoy the festivities of the Cowley Road Carnival which offers plenty of food, drink, music and entertainment.

Even though winter is not considered the high season, there is very little difference in the number of visitors to Oxford or in the hotel rates, so you may still struggle to find cheap flights to Oxford during the winter.

When is the best time to book flights to Oxford?

The price you pay for your flight to Oxford may vary depending on when you book. For the best chance of a lower fare, look to book 60 days in advance of your trip. Fares are likely to increase a fortnight or so before your departure date.

Which day is cheapest to fly to Oxford?

Tuesday is currently, on average, the cheapest day to fly to Oxford. Flying on Sunday will result in higher flight prices.

At the moment, flights in the evening are likely to offer the best value for money for your Oxford trip. A flight in the afternoon will more often than not be of higher cost.

The city of “dreaming spires” all honey-coloured stone, tall chimneys and lofty towers is home to the oldest university in the English-speaking world. Nestled in Oxfordshire and lying on the Thames (known as the Isis for its ten-mile stretch here) and the Cherwell rivers, the city is a perfect destination for all the family.

Younger visitors will know Oxford from Harry Potter books, older readers from Alice in Wonderland and The Lion, the Witch and the Wardrobe. Oxford is packed with places for little ones to visit. Museums include Science Oxford Hands-On, The Oxford Story, The Ashmolean, The Pitt Rivers and Natural History Museum.

The city itself is compact and easy to get around. Climbing the 99 steps of the Carfax Tower, in the centre of the town, will give you fantastic views of the Oxford skyline.

The Covered Market, with its many stalls and colourful displays, dates back hundreds of years. There has been a market in Oxford for more than 1,000 years.

It’s not just easy to walk through the centre of Oxford, it’s recommended. Take a stroll down High Street to soak up the city’s academic atmosphere. You can take a guided walking tour of the colleges all year long, but tours will be somewhat restricted when school is in session. A great way to get to know the city is by riding one of the hop-on, hop-off buses. Oxford has two bus companies (public transport). Stagecoach buses offer a ticket for unlimited one-day travel in the city. The Oxford Bus Company will take you across the city, as well as to the airport, suburbs and four park-and-ride lots where you can leave your car.

When in Oxford, you will quickly become accustomed with bikes, are they are a very popular way to get around the city, especially with the Oxford’s level landscape, so it’s easy to rent a bike. There are bike paths all over the city and along the river and canal. If you need a taxi, you can get one from a taxi stand or call ahead. Taxis are reasonably priced, but they charge extra for luggage, extra passengers, holidays and late nights. For a change of pace, try punting down the river. You can either navigate the punt yourself or hire an expert to move you along.

Oxford is well connected by coach to the London airports – Heathrow, Gatwick, Stansted – and by rail to Birmingham and Southampton. Oxford flights – private and charters only – are only available to Kidlington Airport. London Oxford Airport, (OXF) also known as Kidlington, is a privately owned airport located near Kidlington 6.8 miles (11km) north of Oxford. It is 62 miles (100km) from Central London. 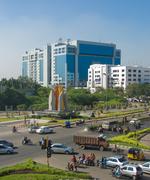